Books, Audio ,Video CDs and DVDs of Discourses by Swami Sandeepananda Giri on the Bhagavad Gita, Upanishads and other text are made available for purchase. 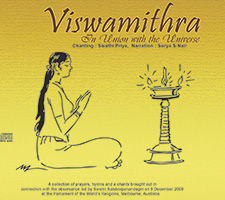 In Union with the Universe
VISWAMITRA is a string of simple prayers, hymns and chants that subtly, yet consciously makes one aware of his bonding with all the elements of the universe.

Composed by the ancient sages of India, these prayers reflect the sincere commitment of Man’s consideration, care and love towards everything else in this Universe. Such a Man is the VISWAMITRA - the Universal Friend - for whom the world is ally and who is ally to the world.

This book was brought out in connection with the Observance led by Swami Sandeepananda Giri at the Parliament of the World’s Religions, Melbourne, Australia. The free CD that comes with the book, is its audio version.